There are no products in your shopping cart.

Powered by Conduit Mobile
Images (Click a Picture to Enlarge): 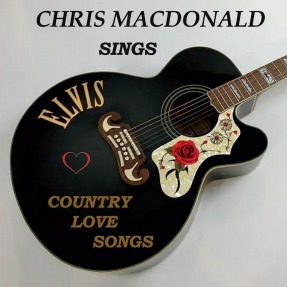 Elvis Presley loved and performed all types of music from blues,gospel, pop, rock-n-roll to country. His country roots were deep. His true feel and understanding of the music and heart of these songs allowed him to put his own stamp on many of the classic country songs he recorded and performed live throughout his career. There were also many ballads written for him during the 1970'S when country music artists and songs were played on multi-format radio stations allowing his songs to cross over to both the Pop and Country charts. This CD "Elvis Country Love Songs is a loving tribute by Chris MacDonald to these songs that Elvis chose to record because of the connection he felt to the words, music and legacy of the artists that influenced him and the song writers that moved him. Chris MacDonald is the star and creator of Chris MacDonald's Memories of Elvis in Concert a national touring full production multi-media tribute to the King of Rock-n-Roll, complete with a dynamic band, singers, and dancers. With the ultimate honor of being the only tribute artist hired by Elvis Presley Enterprises to perform at Graceland’s Heartbreak Hotel, Chris MacDonald draws his audience in with the look, sounds, and nuances that made Elvis the King. The show is not a parody or an overdone impersonation. There is a true understanding of what Elvis did best; connecting with his music and the heart of his audience .It is a natural, heartfelt tribute to an American Icon and his music. As an accomplished and experienced entertainer, Chris has performed in Vegas, Branson and with the famous Legends in Concert stage productions. He has also headlined with Elvis' own original back up group, the Jordanaires and D.J Fontana at the world renowned Hard Rock Live Concert Arena. Through highlights and music from several stages of his iconic career: the early years, the movies, the black leather '68 comeback, the white fringe '70 Vegas concerts, Chris MacDonald shares the incredible story and unforgettable memories of "the shy humble country boy who became the King of Rock-n-Roll". In addition to touring with his full production tribute show ,Chris MacDonald recorded an original country Cd called "No Misconception" in Nashville, with the legendary Jordanaires, Elvis's original back up vocal group. Paying tribute to the traditional gospel country sound ,The CD was produced by Ray Walker and Gordon Stoker of the Jordanaires and features many guest star Nashville studio musician legends that performed on some of Elvis's and other country music star's recordings. Chris also performs contemporary country music and has released a CD called "Country Dance Favorites" covering the line dancing ,slow dancing and two stepping hits from George Strait,Billy Ray Cyrus,Tracy Byrd, Tobby Keith ,Garth Brooks,Alan Jackson,Tim McGraw and many more.

The Elvis Country Love Songs CD along with his tribute show CD "Memories of Elvis in Concert Live" and a tribute to Elvis's Christmas songs called "Merry Christmas Baby" are also available on ( Cdbaby ) (itunes) ( googleplay ) ( spotify ) ( YouTube ) and other streaming services.